Warning: A non-numeric value encountered in /home/customer/www/the731report.com.au/public_html/wp-content/plugins/wp-awesome-countimator/main.php on line 37

Well after my last posting, I’m sorry to say I didn’t attend anymore cooking classes as they always seemed to be to early (11am) or I lost track of the days (they all run into each other) & missed the class.  So I have included below a Sangria Recipe I learnt from the bar staff during Fiesta.

Staying for 5 weeks in 1 campsite was a great experience as it allowed us to catch our breath a little and also the opportunity to meet some really great people whom have become friends.

Around end of OCT the Northern Europeans started returning home to spend Christmas with family & friends and the English started to arrive to escape Christmas with the family and the long cold winter.  A lot of English stay 6 months on the same campsite and will start heading back from MAR-APR.

We’re starting to learn the art of international speak!  We’ve had great conversations with people from all over Europe.  Them asking or talking to us in their language and we answering or talking in English and somehow we both seem to know exactly what we are all talking about.  Well, so we all think anyway.

Spain has been hard hit by the GFC and has really high unemployment.  Development & money being spent along the costa’s virtually stopped overnight.  There are towns, villages, roads where it seems that workers have downed tools and walked off never to return.  We’ve been on road’s which have all of a sudden stop or a roundabout with only 1 exit instead of 4.

There are quite a few coastal villages in northern Spain with apartments at various stages of development.  It’s a really strange feeling when riding around them as there is not a soul in sight and feels like something out of a movie set where a plague has been dropped on the area and no humans exist anymore.  The Spaniards are crazy people and have totally gone out of control with their developments and must have thought all their christmas’ came at once when they joined the EU.  It’s like they had the mentality that ‘if we build it, they shall come’ but once the GFC hit….the richer Northern Europeans didn’t come & the banks just stopped investing.  There is so much dead money just sitting around not being utilized and that will probably not be used for 10years or more.

Valencia is awesome.  The old part of the city is a photographer’s paradise and every corner is an opportunity to take 100 great shots (can you imagine how many photo’s I’m going to have after 2 years – beware if we ask you around for a slides night!!!)   It reminds me a little of Paris with all the buildings the same height and the pretty baroque buildings all in a row with balcony’s overhanging the streets & ceramic tiles everywhere……….sooo pretty!

The city is surrounded by a river that has been dammed as it kept flooding and killing people so it’s now it’s a dry river bed that has been made into a botanical park and bike track all the way around the city.  It’s really amazing and I’ve not seen anything like it before.  There is also  a new section with these amazing new artictial buildings which house their arts and science institutes and it put’s Sydney Opera House to shame.  One is shaped like a fish which is really cool and there are roads, bridges, roundabouts & walkways which cross over it…its really awesome. 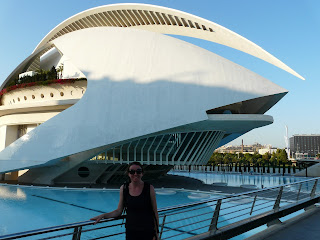 We are now in a village called Calpe which is on the coast half way between Valencia and Alicante.  It’s famous for its huge rock called Ifach & is the next largest rock protruding out of the sea after the ‘Rock of Gibraltar’.  We climbed almost to the top today, which has amazing views of the 2 bays that Calpe sits in and up the coast towards Denia & Javea and down the coast towards Altea and Benidorm. This is called Costa Blanca & the days we have had out and about on the bike riding along the coast have been breath taking.

Benidorm is our next stop…it’s a little bit like the ‘Gold Coast’ of Spain.  Most of the places we have stayed in have been pretty quiet and laid back and there’s nothing wrong with a good dose of ‘Gold Coast’ every now and then.

We also visited two medieval fortified cities called Morella and Sagunto.  Both are on top of the highest mountains in the area & have so much history with battles between the Christians and the Moors.

Mix together in large jug along with large ice cubes.  Serves 1-2 people

***this 1 litre drink cost 4euro during Fiesta & took about 30mins to drink…so wonder we had trouble getting out of bed before 11am.